I fell in love at sixteen. I was in a friend’s wedding, rehearsing the ceremony. The door to the church banged open and two boys walked in. Time stopped. The light fell in almost touchable beams of amber from the windows, catching on dust motes like glitter. Something dropped in my gut like a stone into water and I knew.

I turned to the maid of honor, who I’d never met, and said, “Oh, shit. I’m going to marry that one.”

The first words he said to me, after several moments of staring and blinking and staring some more, were: “You have the most beautiful eyes.”

I remember almost nothing about the wedding that day. It was unimportant. What was important was this boy with the blue eyes, the way I couldn’t look away from him, the way he smiled all lopsidedly and tripped over his words and looked at me like I was impossible. I don’t know what my face looked like, but I remember my bones humming, my skin spangling, my heart saying, over and over, this is it, this is it, this is it. I had never been more sure of anything or more terrified.

We proceeded to date, to make a lot of mistakes, to dance with each other and around each other, to try to date other people, to hurt each other, to heal each other, to make each other ecstatically happy, to make each other miserable. We got together. We broke up. We rinsed and repeated that a couple of times. We knew we were too young to make it work, everyone said so, so we cut and ran as hard as we could. We were young and stupid and petty and mean and hideously in love and totally confused about it.

Sometimes it made us hate each other and ourselves, but the certainty that this was it never dissipated. I didn’t want that to be it. I was sixteen, eighteen, twenty. I was supposed to have years of looking and romancing and dramatic affairs with European lovers ahead of me! I was pretty much as much of an asshole about that as I could manage. And I was nineteen, so you can imagine that I could manage to be quite an asshole. (I really don’t recommend being a teenager, it’s an awful time, hormones are bad and insecurity and indecision are bad and being in love is the best and worst thing ever in combination with those things.) And then, over a series of Extremely Terrible Incidents That Were Totally Unrelated and several remarkable dating disasters and a really straightforward birthday dream, I got it–I was running in the wrong direction. I resolved to go to therapy, make myself a better human and deal with my anger and issues, go back to the problem with a clear head. (Protip: if you’re thinking of your romantic life as a math problem, you should maybe take a breather and try that therapy thing. It works.) I came back to it when I was ready.

But he hadn’t gotten there yet.

The next time we got together, pulled by that immensely powerful sub-dermal magnet despite our extreme grouchiness about it, he picked up the being-an-asshole crown and wore it for a good while. It went…really badly. He ran away into the woods and lived like a freaking mountain man. I ran away to Ireland and lived like a poet. He ate squirrel meat. I jumped fully clothed into Dingle harbor. He drank. I wrote very angsty poetry. It was a whole thing. And yet, in the middle of the night in July, 2015, in Dingle town in the west of Ireland, eating curry chips from Lily’s in my bed in Marian House, I picked up the phone and made a call.

I told him not to ask me out again if he wasn’t ready this time. If he wasn’t prepared to work together to handle disasters, to go to therapy together if we hit a bump in the road, to do whatever was necessary to make it work. We got back together in front of the beluga exhibit in the Atlanta aquarium in January 2016.

And then we got to bask in how stupidly wonderful things are when you stop trying to run a three-legged race while facing opposite directions. When you face the same way and hold hands and step together. When you laugh when you fall over instead of blaming each other. We made time for each other. We chose kindness over anger as often as we could reasonably manage. We both let things go from before with the awareness that we were different people now. We let ourselves become different people. We moved, got a house together, started a life together.

This last year has been hard. For me, being bedridden, housebound, undiagnosed and incredibly ill while also dealing with my parents’ divorce, my grandmother’s cancer, grad school, and my godmother’s death–and for him, juggling his parents retirement and sale of his childhood home, the sale of his family’s business and his transition with it, new and enormously unscrupulous bosses, and being my full time, unpaid caretaker on top of it. We were exhausted. It could have been a test of our strength together. But it didn’t feel like that. No matter how exhausted he was, he took care of me, took time and energy to make me feel safe and at ease and like there was a light at the end of the tunnel. No matter how sick I was, I did my best to show and tell him how grateful I was, to make him feel like there was always an oasis of safety and comfort with me, to let him know that I would support him with whatever I had when he needed it. We had a couple of tense moments, sure, but no one gave up, no one walked out. It was the most terrifying illness of my life, but I was barely scared at all. I was grateful.

Then I got my diagnosis, my prognosis, started my treatment and recovery. I finished the last push of my MFA. He determined that he was going to leave his (horrible) job. We went to Europe to celebrate surviving, surviving together, thriving, even. And there, in my favorite place in the world, Slaidin Beach in Dingle, he asked me to marry him.

And he said, “I’ve never been so sure of anything in my entire life.”

And here we are. I’m recovering–frustratingly slowly, wow, but I hardly fall over anymore and I can drive again and sometimes even manage to cook a whole meal or read a book or go to work! Magical, I tell you. He’s working a new job and so am I. We’ve got two cats and a fistful of crazy birds and a bunch of ghost cats that knock shit over randomly. We’ve got too many books and a lot of mismatched furniture and still, somehow, boxes. And we’re planning a wedding, yeah, but way more importantly, we’re planning a marriage. We talk about everything from my love for, and terror of, the ocean to religion and politics to work to dumb television to his ideas for rpg campaigns to my ideas for stories to our plans for the end of the world. We’ve got issues. We have the occasional argument. But we’re happy. We say “I love you,” so often that other people probably throw up in their mouths when they’re around us for too long. We spend hours at night showing each other stuff that made us think of the other on our phones. We still keep each other up at all hours talking about our interests or our concerns or our intense thoughts about post apocalyptic television shows and novels. He brings me strawberry ice cream. I bring him eggdrop soup. We drink a lot of tea.

What I’m trying to say, possibly in the most long-winded way possible, is that I’m so freaking lucky. I met the love of my life when I was sixteen, lost him, found him again, and he found me, too. I live with my best friend in the world. He encourages me, supports me, challenges me, and loves me–and I try my best to do all of that for him. And I get to marry him.

A year ago, I was in the hospital with blood clots clogging my lungs. I couldn’t have imagined I’d be engaged, graduated with an MFA, employed on my road to being a teacher, or this happy.

We’re planning a crazy wedding–a three day long weekend festival for next November in Renaissance-inspired fantasy garb with a lot of glitter and music and fairy lights and bonfires and food because we are, at the end, very intense hobbit people. I have Ukrainian tailors making me my dream wedding dress. I’m embroidering his wedding vest. I have a massive list of people to send invitations to (shoot me a message if you think you should be on it!) The normal wedding timeline goes right out the window when you’re planning a festival. There’s a deer hunt planned. Most of the wedding party lives in different states or different countries. It’s chaos. It’s awesome. Because one year from today, we’re gonna marry our best friends in the world and throw a massive party to celebrate.

The point is, I’m so happy. I’m so grateful. Thank you, universe, for giving me the most incredible partner I could imagine. He makes me happier than I dreamt I could be, and a little more on top of that. Seriously, universe–thanks. 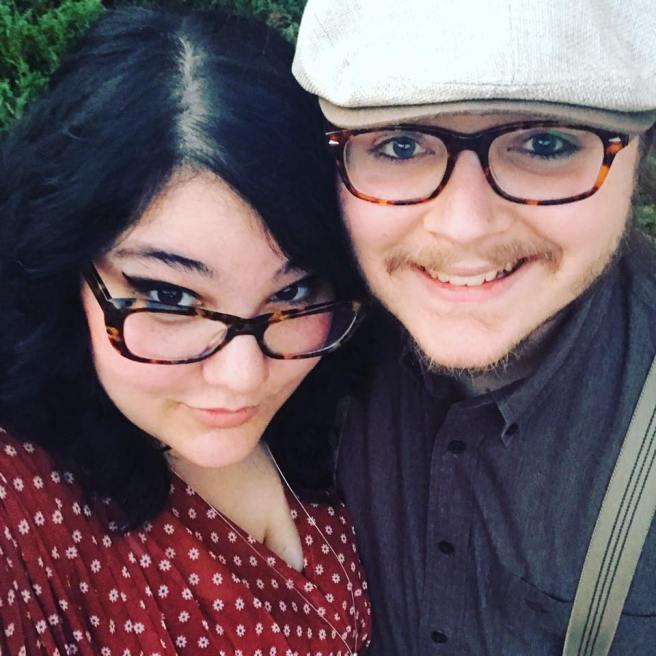